The Pitfalls of BioZorb® Device for Breast Cancer Patients 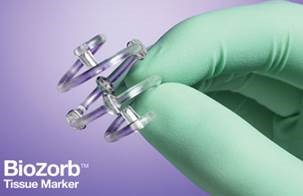 I recently had a lovely woman with breast cancer express serious concerns about a foreign body placed in her breast where her surgeon removed a 7 mm cancer. Her breast cancer was detected on a screening mammogram and was non-palpable. Unfortunately, when she awoke from surgery which was to remove the tiny cancer, she was surprised at a hard mass left in its place. She thought it was postoperative swelling or a hematoma, but on CT scan was found to have a device that looked like a spiral coil with titanium clips. After some investigating, it was discovered that her surgeon placed a BioZorb® device in her at the time of the lumpectomy.

“What is it?” she asked me. It was the first time I had seen it. I had to do some research and found that it is a device that claims to improve target localization and reduce the volume needing treatment for postoperative radiation therapy. While this may be true in select cases where the cavity is poorly visualized, in my patient’s case, it was not necessary and actually created problems. Not only did it create anxiety as the breast had a palpable hard mass where there was none initially, but when it comes to treating the breast with postoperative radiation, it forced me to use a higher energy electron for her final week of boost therapy due to its large size.

Normally, a lumpectomy cavity is treated for 5 fractions with low energy electrons such as a 6 MeV or 9 MeV. Such energies give modest dose to the skin and leave no permanent scarring. As you increase in energy of electrons, it increases the skin dose and you run the risk of seeing more early and late skin reactions. The most disfiguring side effect is the appearance of telangiectasias, which look like red spider veins. No woman wants this on their legs

and certainly not on their breast! BioZorb® claims to dissolve slowly over 12 or more months, but my patient will be having it removed as soon as she can as it has been a source of anxiety since its implantation. I would strongly encourage breast patients to be aware of new technology that has not been fully vetted by long-term follow-up, which BioZorb® lacks. A surgeon should not be making a decision to place these devices without the informed consent of the patient and not without discussing its risks and benefits with the radiation oncologist. It did not help, and in fact caused harm in this woman who, due to the BioZorb®, now faces the uncertainty of developing telangiectasias by her lumpectomy cavity in the future.

September 1, 2020
Known as Betsy to her friends and family, Ms. Susan Arriola has a colorful past. This former corporate boss turned flower farmer from New Ulm...
Next Post
Back to blog home

Managing Cancer as a Chronic Disease

Deep Seated Lymphoma at the Neck Responds to Targeted Radiation