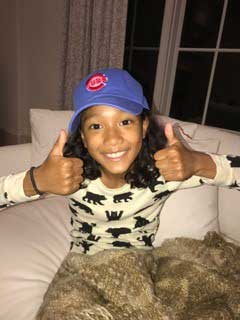 Not since 1908 had the Chicago Cubs won a World Series, which was the longest drought in baseball history. Being a Chicago native and living blocks from Wrigley Field for more than a decade, this month has been an emotional one. I had not stayed up to watch baseball like this ever before in my life but this was different. Each game of the World Series was increasingly exciting and nerve racking and my daughter asked me one morning, "Why are you scared of baseball?" I asked her what she meant. She said she could hear me from her bedroom screaming at the television as she tried to fall asleep. Oh! Then yes, I was very scared of my Cubbies losing the World Series. Fortunately, it took game 7 and the 10th inning to do it but as a team and with fans around the globe, they pulled through and beat the Indians 8-7. (Here is my daughter watching history as the Cubs won in game 7!) Sometimes life seems hopeless but then again, sometimes patience pays off and victory is around the corner to those who never stop believing in the improbable. Congratulations to my hometown Cubbies and the players.

September 1, 2020
Known as Betsy to her friends and family, Ms. Susan Arriola has a colorful past. This former corporate boss turned flower farmer from New Ulm...
Next Post
Back to blog home

Quarantine birthdays. It's a thing.

Runner refuses to let breast cancer slow her down