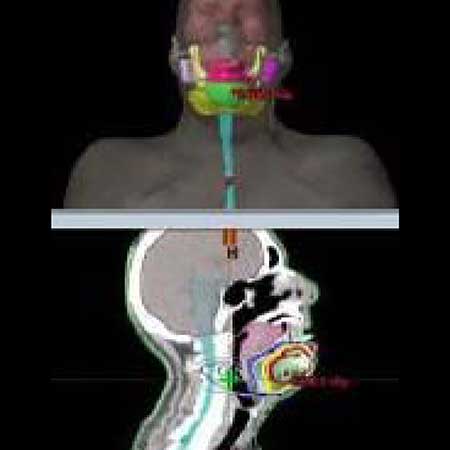 I met Mr. Jose Flores two years ago when he was complaining of inability to eat due to a lesion along the floor of mouth. He had a history of tobacco abuse and for months, struggled with dental issues that led him to eventually lose all his teeth. Once he began being fitted for dentures, it became obvious that something was very wrong. On exam, I could see a large 6 cm irregular and firm mass fixed to his floor of mouth extending to his mandible bone. He had lost 20 pounds. Biopsy of the mass confirmed squamous cell carcinoma and PET scan proved the cancer had not spread beyond his oral cavity. The tumor was a Stage 4 but still curable.

We quickly coordinated the plan for surgery followed by postoperative radiation therapy. Pathology after surgery noted the tumor had invaded the mandible bone but had not gone through it. With the expertise of his ENT surgeon and plastic surgeon, the tumor was able to be entirely removed with negative margins. He then started six weeks of daily XRT with the help of a custom made dental stent to push his tongue posteriorly to avoid being irradiated. 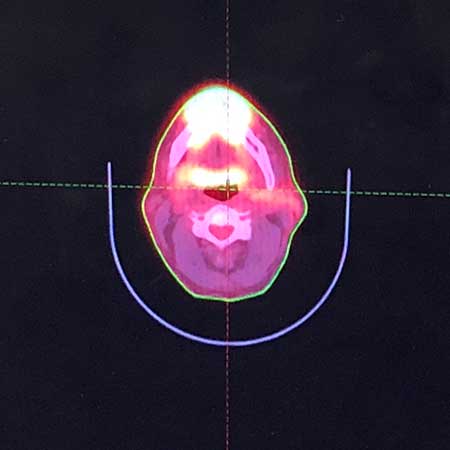 Here you can see his PET/CT scan image with the known Stage IVA cancer before treatment and his treatment plan illustrating the isodose curves where dose was delivered. Now two years later, Mr. Flores continues to thrive, is working full-time and enjoying time with his family. Since diagnosis, he quit smoking and has never looked back. Mr. Flores is grateful that his routine visit to his dentist regarding dentures led to effective cancer screening and timely treatment.

Deep Seated Lymphoma at the Neck Responds to Targeted...

August 1, 2018
Ms. Evelyn Viola has been a dedicated hospital volunteer for over three decades but earlier this year, to her surprise, she was suddenly a patient...
Previous Post

June 1, 2018
Remember all the challenges of having babies? Breast feeding at all hours of the night and doing laundry with every spare moment…just praying...
Next Post
Back to blog home

Cancer Free with No Regrets

The Pitfalls of BioZorb® Device for Breast Cancer Patients

Psychology of fear in cancer patients

Deep Seated Lymphoma at the Neck Responds to Targeted Radiation